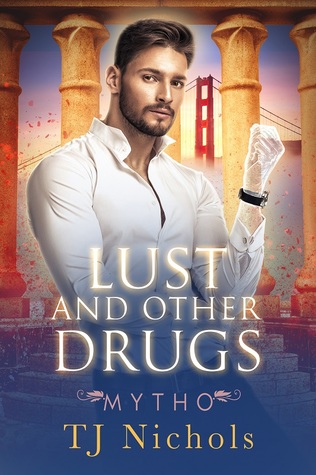 Police officer Jordan and dragon shifter Edra might have to work together, but they don’t trust each other—even if sparks do fly between them.
If anyone finds out Jordan’s a mytho sympathizer, it could kill his career. No one can know that he frequents the satyr dens and uses the drug Bliss. A dead satyr might not get much attention, but two dead humans who appeared to overdose on Bliss? That shouldn’t even be possible.
And it might not be an accident.
Edra, Mythological Services Liaison, has been covering up mytho crimes to protect the community’s reputation. With a mayoral election looming, the last thing his people need is a scandal like this one.
To get a murderer off the streets, Jordan and Edra will be spending a lot of time together, and it won’t be easy to keep up with their deceptions. Or keep resisting each other.

Jordan is a police officer and a human who has to work as a liaison agent with a dragon shifter, Edra.
Both men don’t trust each other, but they both have one goal, make sure that the peace and justice between humans and mythos are served.

Lust and Other Drugs by TJ Nichols is book 1 of a new series Mythos. I loved The Studies in Demonology series and was happy to start this new one.
After human scientists had made Terakon on Earth (a parallel planet where all the mythological creatures of our tale lived) collapse, Mythos and humans have to live together. It’s not easy, humans being humans they hate mythos and refused to integrate them into our world, even if it’s them who have destroyed their world. Mythos all suffered from the collapse, they lost their magic, their home, family, they also lost some of their abilities, and with all of that, they now have to fight to have a decent life. In this tense climate, Jordan and Edra try to work together and to trust each other.

Jordan is a human who loves to wear lingerie and addicted to Bliss. Bliss is a kind of drug created by Satyrs that give a powerful orgasm. Jordan is a pro-mythos rights, and he believes that they are human (at least the ones able to talk) and should have rights. He’s lonely in this fight, but he has the support of the mythos’ community and the help of Edra.

Edra is a shifter Dragon, a knight. Back then, in his world, he was like a police officer, and he served justice. Now, on Earth, he works at Mythos-Service, and helps the mythos to settle with houses, school, work and every problem they can have. He’s also the liaison agent with Jordan and hopes to help his community to finally have justice and respect by humans.

I liked the book even if, at first, it was confusing. The plot and the story are original, and I love fantasy when two worlds collide. The MCs are interesting, but something was missing with them. I found them empty even if they’re very complex…I don’t know how to explain it.

It’s the first book of the series, so it’s the book where the background is set, and the characters and universe are introducing to us. It was a little bit too long, too repetitive and sometimes I had the feeling of reading the same thing with different words.

I’m curious about the next book. Now I know the universe, the MCs, the background, I’m curious to see how it will be developing.

It’s 3 stars for the Dragon and The “Elf”