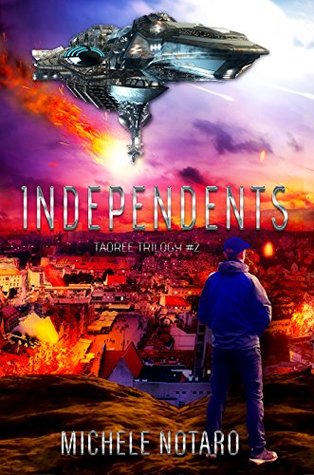 All I’ve wanted to do is keep my family safe. All I’ve wanted was to protect them from the evils of the world… but I’ve failed. I’ve failed so badly, and now all of them are suffering… I’m suffering…
We’ve lost so many, and now that we’ve lost one of our own, I don’t know how to keep going. I don’t know how to protect them anymore. But I need to stay strong, I need to keep fighting because I would rather die than let another one of my family members get hurt.
We need to get to the Taoree Independents camp in order to save my brother. Supposedly they can protect us from all the turmoil, and they have tools to help Wes… or at least that’s what Orrean says. He also says that they want to fight back, but I don’t see how we could ever fight back against all of the monsters that have taken over our world.
Put yourself in my shoes and tell me there’s a better way. Tell me there’s a better option to save my brother, to keep my family safe. If you made it to that camp, would you just cower and hide, or would you stand up and fight back?
Independents is Book Two in the Taoree Trilogy and is meant to be read as part of a series. This book ends on a cliffhanger, but there is a promise of a happy ending at the end of the trilogy.

Jeremy and his family are making their way toward the Independents camp. They need to be there as soon as possible if they want to save Wes’ life (J’s little brother). Meanwhile, Jeremy is still grieving and refuses to accept his bond with Orrean, making them both suffer. While trying to understand everything about the war that’s raging in the world and to find a way to win it, Jeremy has another war to battle, an internal war with his heart.

Independents is book 2 in the Taoree Trilogy by Michele Notaro, and it was as good as the first one.
In this book, we follow our favorite mismatched family making their way in the Independents base and further into the war against Emperor Thelonius’ army and madness. Jeremy is still grieving and learning that his bond with Orrean is deeper than what he thought, and it’s disturbing him more than anything. He rejected it, rejected Orrean and shut himself out. I admit I wanted to slap him once or twice…ok a lot of times, but I could understand why it was so difficult for him to accept this new situation.

The plot and the story were very good. The book starts right after the end of book 1 (Taoree), and we discover more about the war, the resistance, and more about Orrean’s life. What he’d been through, what he had to do for the resistance, and what he did and still does for Jeremy. I have a huge crush on Orrean. I loved the universe that Michele Notaro created. The characters aren’t shallow; they evolve with the story, and we see them grow. I loved that even with all the horrendous things they have to see and live, they still have time to be a family, to laugh, and to banter.

The book is divided between their way toward the Independents camp, their life there, and Jeremy and Orrean’s bond. There was a lot of anger, pain, and angst between them but also purely beautiful moments full of love and tenderness.

I was completely hooked in the story and couldn’t stop reading until the end. I’m addicted to this series. I have to tell you that you’ll scream like I did with the huge cliffhanger at the end.

5 Stars for my favorite Alien and his Balu.